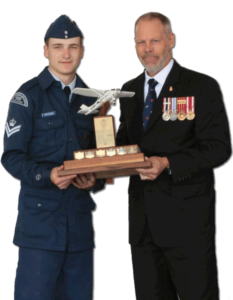 Cadets can receive a few awards for their performance, community service or even bravery. Cadets are also able to receive any Canadian Order, Decoration or Medal that is available to Canadian citizens, such as the Medal of Bravery. Cadets also have a number of scholarships that they are able to apply for to assist them with post secondary education costs. For more information on Canadian Medals, visit the Governor General’s website at: www.gg.ca.

Continuation Flying Training Awards: Established to provide continuation flying training cash awards for cadets who have won Air Cadet Power or Glider Wings. Applications are mailed annually directly to each flying and glider scholarship recipient for that year. Graduates of that year and qualifying cadets from previous year’s scholarships should submit their applications to the National League Headquarters before the October 31st deadline.

Harry Astoria Memorial Gliding Award: This award is available to Air Cadets who are selected as the Top Glider Graduate in British Columbia. This award has been initiated in memory of Harry K. Astoria and his long time dedication and service to the Air Cadet League of Canada, in particular for his leadership and dedicated service to the British Columbia Provincial Committee Air Cadet League of Canada. The award has a cash value of $500.00. The Harry Astoria Memorial Gliding Award is for presentation annually commencing August, 2001.

Bill Batchelor Continuation Flying Training Award: In memory of a long term President, mentor and volunteer, the Air Cadet League of Canada, British Columbia Provincial Committee, has established the Bill Batchelor Continuation Flying Training Award, to be presented annually to the Top Graduate of the provincial Flying Scholarship program. The award has a cash value of $500.00. 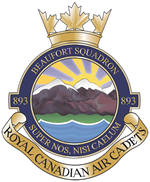